Navigate thru all the sub categories of the website

In April 2021, Smoky Lake County partnered with Wise Use to conduct a Public Input Survey, which received several hundred responses from across the province. In May, we published the 'What We Heard Report' which will be viewed here.

Here is a map displaying the many supporting municipalities to-date!

What is CHRS? (link)

The CHRS serves to commemorate and celebrate the values that make exceptional Canadian Rivers unique and special.

The North Saskatchewan River (NSR) has previously been identified as representing outstanding and exceptional value. In the Smoky Lake Region, this includes the Victoria District National Historic Site of Canada, Victoria Settlement Provincial Historic Site, Metis Crossing, and many other sites of significance near the river corridor.

We have so far received more than sixty letters of support from river communities and community groups, and Alberta Minister of Environment Jason Nixon has committed to support the project!

NOTE: Designation is commemorative. The Management Plan (aka Designation Document) is not an additional layer of regulation or red tape. It does not affect on jurisdiction or ownership. Instead, Designation is intended to promote public respect, engagement, and participation in making good river-management decisions. 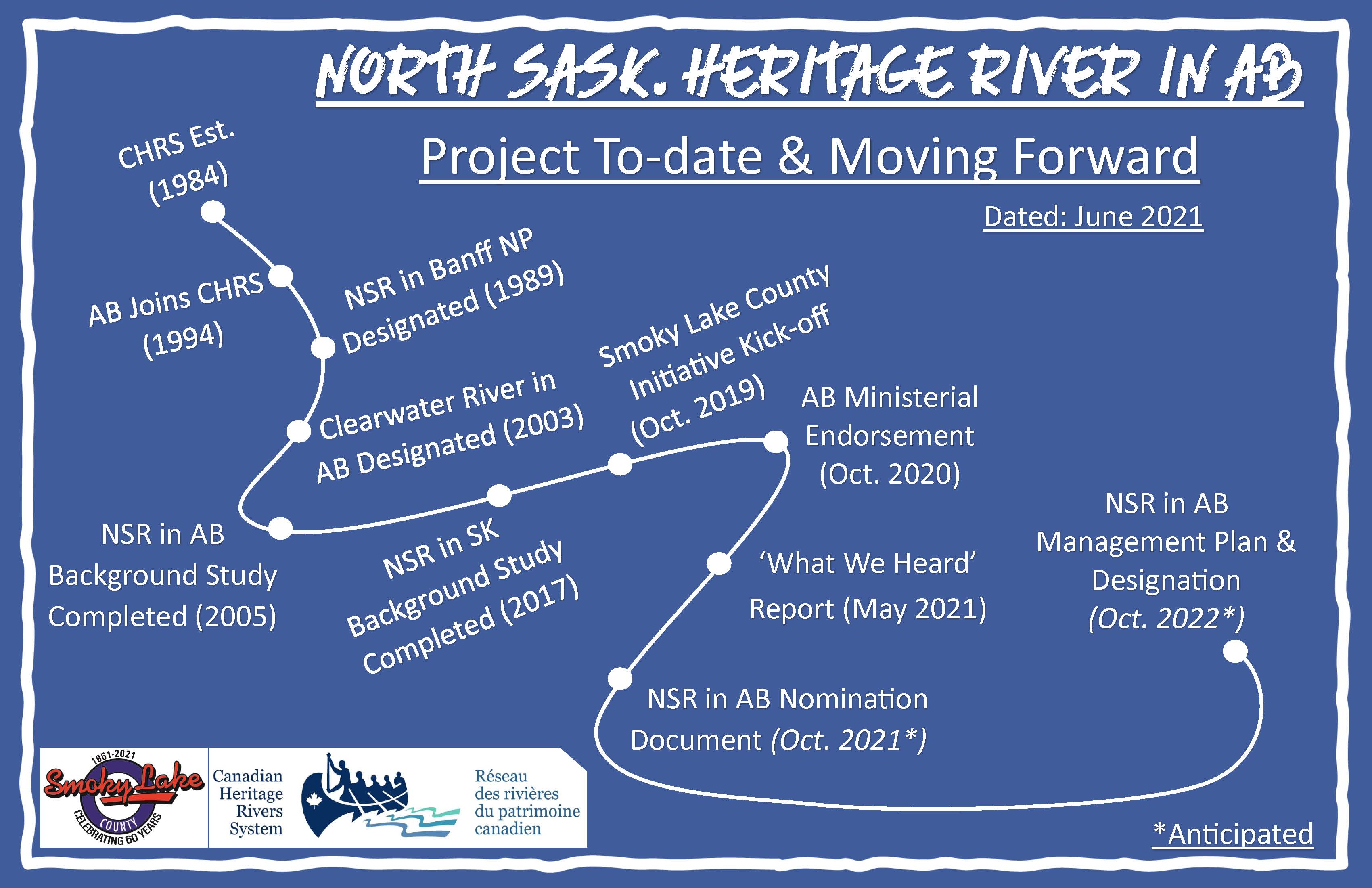 Rising in the Rocky Mountains, in the Columbia Icefield, and flows generally northeast, reaching Smoky Lake County, before continuing on its 1,200 kilometre journey to join with the South Saskatchewan at about Prince Albert, and beyond to Lake Winnipeg, reaching the Arctic Ocean of Hudson's Bay via the Nelson River.

The charter of the Hudson’s Bay Company, granted by King Charles II of England in 1670, specified that the company could claim all lands in the watershed of the Hudson’s Bay. Named Rupert’s Land after the king’s cousin Prince Rupert of Bavaria, the first Governor of the HBC, the extent of the grant was originally unknown. It was the Saskatchewan River system which defined Company’s huge western hinterland and, subsequently, title to vast tracts of land across the Canadian prairies.

Explorers noted that the Blackfoot people called this river Omaka-ty, or “Big River”. French Canadian maps dating from the 1790s label it Rivière Bourbon in honour of the French king. But it was the Cree name, Kisiskatchewani Sipi meaning “swift current river” that endured. Alexander Mackenzie wrote the name “Saskatchiwine” in 1793. The modern spelling came to the fore in 1882, when the Alberta and Saskatchewan Districts of the North-West Territories were created.

WHAT ARE HERITAGE RIVERS?

Canada’s +40 Heritage Rivers are recognized nationally for their outstanding natural, cultural, and recreational heritage. These rivers are an important part of Canada’s rich heritage, and shape who we are as a nation.

Once rivers are designated to the Canadian Heritage Rivers System, they become part of a network of waterways that are cared for by passionate river stewards. Governments, local communities, conservation authorities and local citizens come together with the overarching goal of celebrating, conserving and protecting designated rivers.

WHAT ARE THE BENEFITS OF CHRS HERITAGE DESIGNATION?

Being a part of the Canadian Heritage Rivers System means an opportunity to:

The Canadian Heritage Rivers System informs, inspires and encourages Canadians to connect with the country’s river heritage and share in its safe-keeping. Our heritage rivers are integral to the health, well-being, and identity of Canada’s current and future generations.

DOES A CHRS DESIGNATION RESTRICT DEVELOPMENT?

No. The designation is commemorative and non-regulatory, meaning no new regulations or rules are brought-about or implemented as a result. Existing legislation already in-force continues, and the designation may serve as vehicle for collaboration and conversation among governments, residents, and landowners.

WHAT HAPPENS AFTER DESIGNATION?

After a river is designated to the System, an annual report is prepared each year describing changes, improvements and threats to the values for which the river was designated. River-based events and stewardship actions are also listed in annual reports. Every ten years, an in-depth review of the river’s values is undertaken and a monitoring report on the decade is prepared and tabled with the Board.

Smoky Lake County has removed the existing Fire Restriction effective 2:00 p.m. May 28, 2021. New fire permits will be issued and subject to inspection.

Off-Highway Vehicles can start wildfires – check frequently to ensure hotspots are free of debris, and make sure mufflers and spark arrestors are working properly.

Never leave a campfire unattended. Soak it, stir it and soak it again until cool to the touch to ensure it is extinguished.